All hail the kings and queens of CreCommedy Nights '12 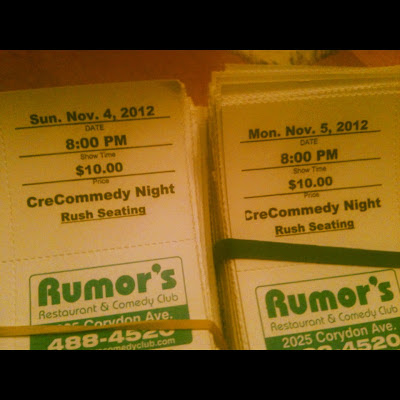 CreCommedy Nights '12 at Rumor's were a raging success as 32 of Red River College's funniest and bravest students took to the stage to perform stand-up comedy for the first time.

Special thanks to former students Cara Lytwyn and Dan Verville for sharing host and emcee duties, to CreComm students, grads, and friends who stopped by to watch and judge the big show, and to Rumor's for allowing us to crash the place.

Our two panels of judges have spoken and selected these comics as our top six of the night:

Each of these hilarious people earned a 17/20 or higher from the judging panel - a feat within itself.

See you in one year at Rumor's.
Posted by Kenton Larsen at 6:37 PM