Look before you sleep at work 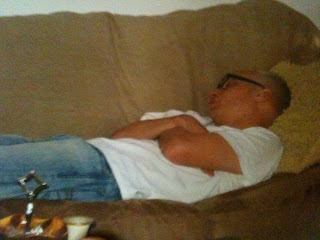 Like Woody Allen, I sleep with my glasses on.
When I sleep, I dream.

Which is why I've looked under my work desk many a time and fantasized about having a work/bed setup just like George Costanza had on Seinfeld: 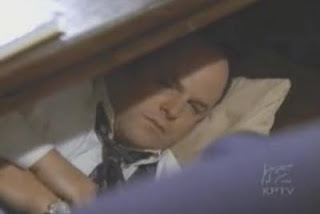 Ahh, I feel more relaxed already.
Who among us hasn't wanted to catch 40 winks at 3 p.m. after the standard, 2 p.m. maple-leaf martini allotted to every man, woman, and child in Canada under the Canadian Charter of Rights and Freedoms?

The area under my desk is airy and spacious, and I do have some stolen (not by me) hotel linens and pillows from the Chicago trip I don't have to return until August; I could swing a pretty awesome bed 'neath my work area if I put my mind to it.

Why it reminds me of the time (cue wavy lines and harp music)...

When I was but a lad, working in the Communications department of a large, faceless corporation, I drove to Minneapolis to see the Psychedelic Furs and came back the same night - a seven-hour drive either way.

Great band. Great trip. But I made it back just in time to report to work, sans sleep.

Sitting at my desk, I was ready to tackle the day with guns blazing. But first, I just needed to close my eyes for a... I jolted awake moments - hours? - later and was so startled, I flipped my glasses off my head and shot them into the air. Where they landed, I knew not where.

I got up to find them and - crunch - I felt them flatten beneath my foot, not unlike Messy Marvin did in A Christmas Story. Blind and stressed, I had no choice but to go home early, lie down, and sleep for 12 hours straight.