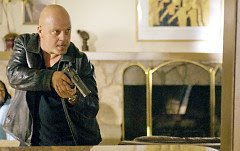 According to the writers of the Shield, there's a fate worse than death or jail, and that's an ill-fitting suit and a cubicle.

This week (in Canada), the seventh and last season of the Shield came to its exhausting conclusion in a 90-minute Tour de Force that left little doubt that this series, not the Sopranos, is probably the best TV show ever (OK, maybe it's neck and neck with the Wire, but that's another blog).

After watching every episode of the Shield through seven seasons, the finale was in many ways expected and - in many more - shocking. So visceral is the show that after the credits rolled, just after 1:30 a.m. on a work night (thanks, Showcase), I felt so shaken that I couldn't sleep.

Entertainment Weekly sums up the feeling nicely in its review: "S#@! As in, Holy."

After Lem's death two seasons ago, we knew that the Strike Team would eventually implode. The big question: would the guys live, die, or go to jail? Who would've guessed all three?

The biggest shock in the finale came early, setting the scene for the quiet scenes later on: Shane, seeing no hope for himself or his family, takes his own life in the bathroom as his former colleagues burst through the door.

The sad reveal: off-camera, he's also taken the life of his wife and child, who are positioned on the bed clutching flowers and the toy police car that Shane bought him in an earlier scene. A real heartbreaker.

Who goes to jail?

That would be Ronnie, who survived two seasons longer than Lem and became a fan favorite late in the show's run, after saying virtually nothing over the first six seasons. Betrayed by Mackey, he's so shocked, he stammers and then completely loses it.

The last time we see Ronnie, he's scrapping with the officers trying to lock him in the cage as Vic walks by without so much as a glance in his direction.

Vic, but he's sacrificed everything. In the end, he's a schmuck in an ill-fitting suit in a jail cell all of his own: a drab and poorly lit cubicle with a PC(!) on which he's told to produce daily 10-page reports, single spaced! The horror!

After some excruciatingly long and quiet close-ups in two key scenes (one at the Barn, one in the cubicle), we can't be sure what Mackey is thinking. Does he feel sorry? Does he harbor regret? Would he do everything all over again? We expect to see a tear roll down his cheek, but it doesn't happen.

In the closing scene, Vic looks out the window as cop cars speed by with their sirens blaring. It looks like he might also take his own life...until he packs his gun into his belt, gets that old snarl on his face, and walks out of the building with renewed purpose.

It's too bad the show is over, because I'd love to see Vic get himself out of this one. Because if there's one thing I've learned from watching the show for seven seasons, it's this: Vic Mackey is much smarter than me.

- One of the show's disappointments is that it never resolved the storyline about Julien's sexuality versus his religious convictions. We see him checking out a couple of guys in the finale, but is he still married to a woman? And going to church?

- We know that Claudette will die soon, but it didn't happen on the finale. I would've bet otherwise.

- Dutch caught his boy serial killer, but I expected a little more cat-and-mouse shenanigans than what we got. The kid's final line is a good one, though. Why have all serial killers spent at least some time in southern California? "Because everyone who goes there wants to be famous."

- As well, the famous scene in season three, in which Dutch chokes his cat to better understand the mind of a serial killer, made me wonder if maybe Dutch did kill the boy's mother in order to frame the kid and get him off the street. Turned out there was no hint of that happening, but it would've been potent storyline to see Dutch go to jail while the Strike Team beat the rap.

- In a nice bit of continuity from a couple of other great cop series, actor/director Clark Johnson, appeared as the witness relocation officer for Vic's wife and kids. An actor on two other classic cop shows: Homicide: Life on the Street, and the last season of the Wire, he also played football with the Toronto Argonauts in the CFL.

- It's also pretty nifty how the surprise crime that happened in the first episode, Vic's murder of officer Terry Crowley (Reed Diamond, also from Homicide) permeated throughout the seven-season arc. In retrospect, it seemed like the crime had been forgotten, until Shane killed Lem, that is.

Dense with plot and more emotionally satisfying than the Sopranos' bait-and-switch finale, it'll be really sad to not have the Shield around anymore. Never has there been a TV show that kept the tension and stakes as high; that it happened in a genre that seemed played out over a decade ago makes it all the more remarkable.
Posted by Kenton Larsen at 5:39 PM