Great things about being alive in 2008 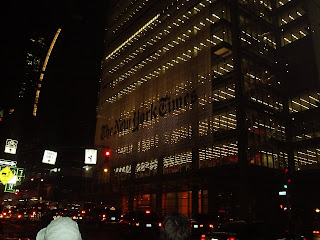 I realize that I say the words “New York Times” in class about a million times a year. I’m trying to cut down, really I am, but this paper shows regularly why the news matters, and how to cover it with class and style.

It also made me happy when CTV’s Murray Oliver stopped by the classroom earlier in the semester and said the same thing – even after all but two students said they’d heard of CTV Newsnet. Yipes – but that’s another story.

In Canada, the NY Times Sunday edition costs a fortune, and you get it a day late, but the Times’ Public Editor, the Ethicist, and Rob Walker’s “Consumed” column make it all worthwhile.

Best issue of the year included the magazine’s exploration of new media, called: “How we watch stuff now.”

Add a Starbucks chai latte to the mix, and I’m in Heaven (should that be a separate entry?).

Theatre: Sitting in the front row at Spring Awakening on Broadway

I’ve never before sat one foot away from a 12-year-old Broadway performer, especially one screaming, “You’re totally f***ed!” into my face, but everyone should experience it at least once.

“Yes,” I thought. “I am totally f***ed. Thanks for reminding me, young, talented person with your whole life ahead of you.”

Construction: The Canadian Museum For Human Rights. And (sigh) IKEA.

The first national museum outside of Ottawa will be right here in Winnipeg, and it looks like no one is going to be able to take it away from us before it’s built – not even the Globe & Mail and 208 survey respondents. Bastards.

And IKEA is coming to Winnipeg. It’s sad that the second story gets all the press, but at least we can move on as a people: we’ll never have to look at an empty lot again and silently wonder, “Could that be the future site of an IKEA?”

Film: WALL-E and Man on Wire

The two best films of the year made me forget how much I hate the modern-day theatre-going experience, what with the cell phones, the air hockey, and the frigging kids (how I hate “the kids:” always text messaging, yapping, and playing in my JELL-O tree).

WALL-E was the best interspecies romance since a rat asked out Brooke Shields in the Muppets Take Manhattan, and the environmentally friendly storyline about the last plant on Earth and the bloaty bloat bloaties who ruined it couldn’t have come at a better time.

Man on Wire was the best documentary – and film – of the year. Like all the best films every year, this one comes close to explaining the meaning of life. At the very least it ponders the question as it chronicles Philippe Petit’s illegal tightrope walk across the World Trade Center buildings in 1974.

The best part: the New York City cop looking shell-shocked and awestruck at a news conference as he explains what he’s just seen at 110 storeys up, and how he’ll likely be the only person who ever gets to see something like this.

TV: Letterman gets mad; the Shield and the Wire come to an end

Letterman is at his best when he’s angry at authority. And he went nuts when John McCain went AWOL from his show – ostensibly to go back to Washington to deal with the economic crisis, but really to hang out with Katie Couric on her “more important” show.

Letterman’s hilarious (and downright courageous) rants for the next week – up to and including McCain’s two “apology appearances” - were incredible. “I haven’t had this much fun since my last interrogation,” said the contrite McCain.

The Shield and the Wire are the two best TV shows of all time. One high octane (the Shield), the other more contemplative (The Wire), they came to an end with gripping and fitting series finales. Best of all: no cut to black. I wrote about the Shield here and the Wire here.

Bistro 71/4 is one of Winnipeg’s few authentic upscale New York experiences; the owner working the grill like his life depended on it, the noisy and intimate room packed with advertising and fashion professionals, and the best mussels I’ve had in a long, long time.

L’Enoteca at Hecla was a huge surprise; one of the best steaks I’ve had in my life and great, personable service. BUT could we solve the problem with the reservations? The hotel front desk can’t take reservations for the restaurant, and has no idea whether it’s booked. No one answers the phone at the restaurant or, apparently, checks the messages. This should be an easy fix, guys. Hell, I’ll do it for one free meal a night. Result!

I found myself addicted to very few videogames this year, but GTA IV was the one that did it last summer, and offered the most bang for the buck. Great writing (check out those ad parodies on any of the radio stations) and a long, rewarding story arc that kicks the crap out of other “free roaming” games, like Mercenaries 2 (a great-looking game with a story that you can resolve in an hour).

My beef: I will never again roam a virtual world for upward of 10 hours shooting pigeons to get the big reward of…nothing!

The Secret Machines put on the best show in front of virtually no one that I’ve ever seen (and that must make me "virtually no one!"). My article about it is right here.

And Holy F**k knocked my socks off at the Park Theatre. Until the sound guy told them that they couldn’t come back for an encore. No, because that would have brought us pleasure.

I still can't believe how much Bill Cosby rules. More than Bob Dylan, according to my original article.

And what can I say about RRC's comedy writing classes this year, other than the fact that they ruled the school and the King's Head in equal measure? One first-year student told me that the first show was better than anything he's ever seen at Rumor's, and I would extend that to Just For Laughs. Who needs Russell Peters when you've got these guys?

Finally, we can charge people for "word of mouth media." And it's fun and you get free samples too! Check out how this works in my original article.

Yes, I know I'm instructor at Red River College; but if there's a better communications or media program in a better college with better students, then I don't know about it. And I don't want to know about it, or I might have to apply for a job there (har, har)!